Read about keeping insects as pets and cool information about the life of bugs.

I got another question in my e-mail box to identify an insect. This time from Martina Stoecker located in Western Cape, South Africa. This is it: 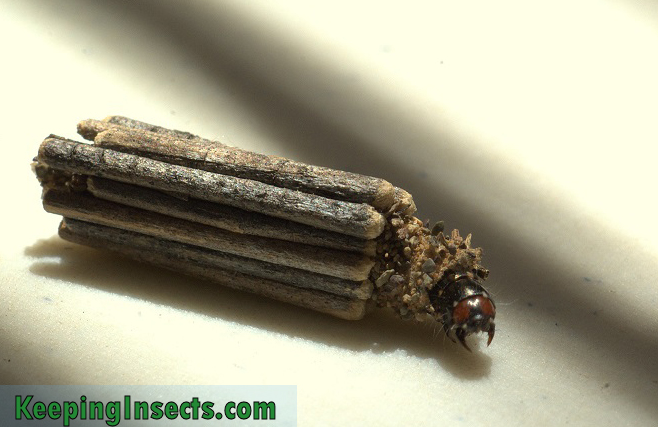 After some research it turns out to be a Case Moth larva. And these bugs turn out to be pretty interesting! They live inside a case made of sand, plant material and debris that they gather themselves. They use silk and the materials to make a bag where they hide in. The bag or case protects them and helps them to hide from predators. Because case moth larvae have to make use of the materials they find to make their casing, they can look very differently. The one on the picture has gathered quite a few small sticks to make a casing with horizontal lines. Very fashionable! Especially with the sandy collar area.

Other common names for case moths are bagworms. They belong to the family Psychidae. There are around 1400 species of bagworms and they occur all over the world. Only the larvae wear the distinctive bag, after pupation inside the bag a small moth emerges. The colors, size and host plant differs greatly between the species. 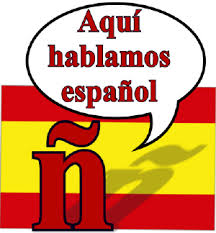 A while ago I had this website translated to Spanish! I think many people would like to get the information on this website also in another language than English. After much consideration I choose the Spanish language, as I want to learn this language at some point and because many people all over the world speak Spanish.

So, if you are looking for insect information in Spanish, check out: www.cuidandobichos.com

Angie send me the following message and question:

Thank you for this site it’s so informative. I myself am not much of an insect fan, but we had this mantis in our garden for several months this summer. It’s been fun observing him, then we had a sudden temperature drop this week and decided to bring him in so he wouldn’t die (it snowed). We have a nice enclosure for him, he’s been eating well and I do mist the plants in the enclosure for him to drink from. I’m just curious about the color of his eyes. When he was outside they were green, now they seem to have gotten darker. I work so I only see him in the early mornings and late evenings when I get home. In the garden we only observed him in sunlight as he would hide out of sight at sunset. Is this color change normal due to lower light, or is this a sign that something is wrong?

It’s a close observation and I’m glad to say it’s completely normal. The eyes of a mantis will differ in color depending on the light conditions. Pigments in the eyes of a mantis will gather when there is low light or darkness. You can see this around half an hour after the mantis is placed in the dark. In the light the pigments will disappear again leaving the eye light-colored.

In different mantis species the color of the eye changes. In the Orchid Mantis Hymenopus coronatus the eyes can be white or light-pink in bright light conditions and deep purple in darkness. It’s a stunning difference! Mantises with green eyes will change the color between light green and dark green, almost black. Mantises with brown eyes like the Dead Leaf Mantis Deroplatys desiccata will develop completely black eyes in darkness.

The eye color probably changes to facilitate better vision for the mantis. It is unclear how the pigmentation helps the mantis in its ability to see better.

There is one condition, an illness, in which mantises get dark eyes. This is not caused by pigmentation and it does not depend on light conditions. It’s a permanent black or dark spot in the middle of the eye and it does not move position when you look at it from different angles. It is damage to the surface of the eye caused by scratching the eyes of the mantis against the glass or plastic of its container. Sometimes a mantis can get obsessive trying to approach or catch a prey that is on the other side of the glass container. While trying to approach the prey the mantis brushes its eyes back and forth against the glass, damaging the eyes. When the wound gets infected it turns black. This problem is pretty severe because the eyes will not recover and vision is lost in the area where the wound is. If you see your mantis brushing it’s head and eyes against the container, make sure to remove the object it is after or place the mantis in a net cage. This will prevent any other damage to your beautiful pet mantis.

The following mantis has been photographed in Italy, Europe. The sender is wondering which species it is. Let me tell you it’s really hard to determine a species through a photograph. So which this animal I can only be relatively sure its a Empusa sp. What I do know for sure is that its an adult male. Adult because of the wings and body type and male because of the large and beautiful “feathered” antennae. What a beautiful mantis with the green wings and brown speckled body. Truly a expertly camouflaged animal. 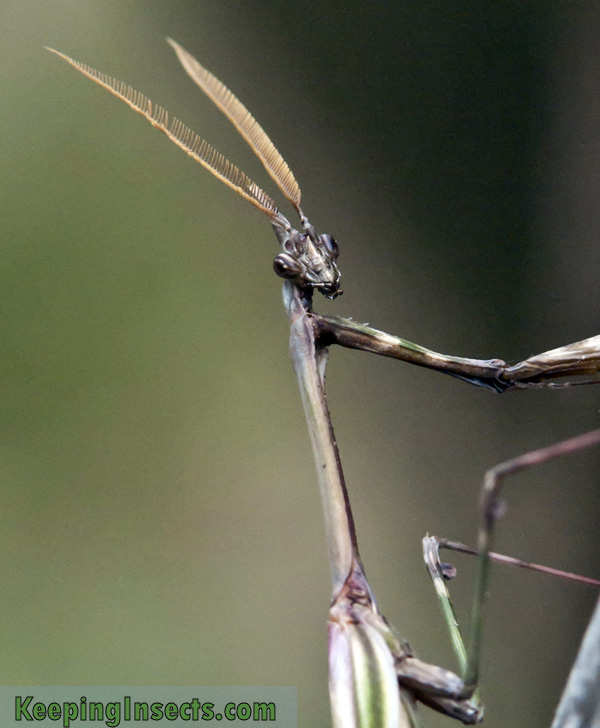 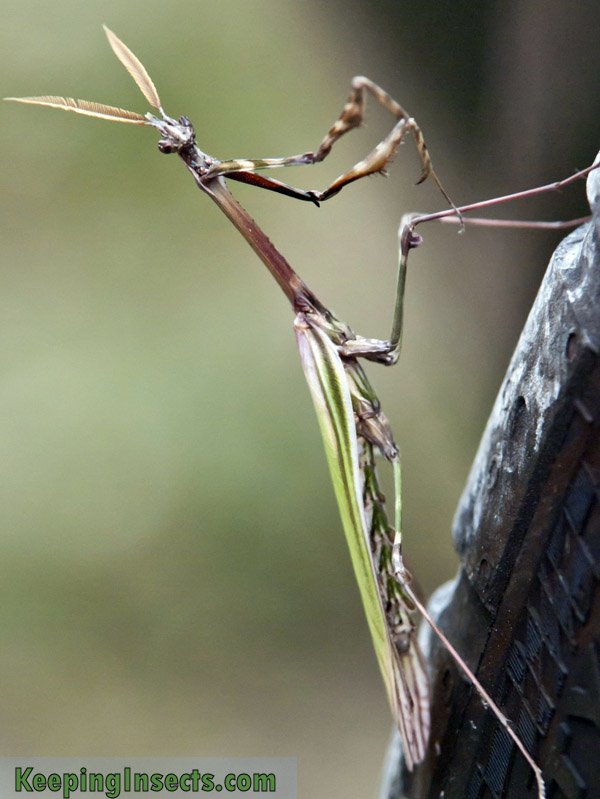 I got a message from a visitor of this website asking if I know what could be up with this caterpillar he found. He attached some pictures, and I couldn’t believe my eyes! I had never seen such a creature! He mentioned it was a Hickory horned devil caterpillar. Check it out: 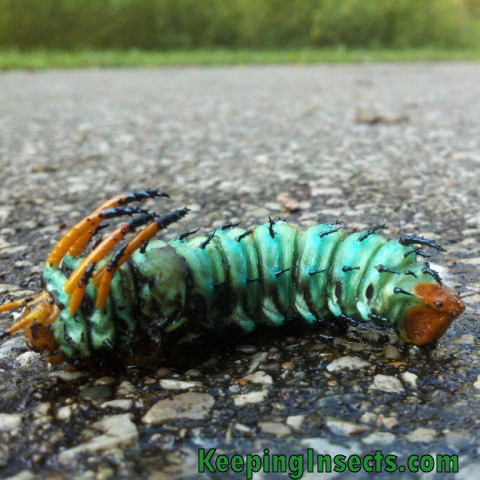 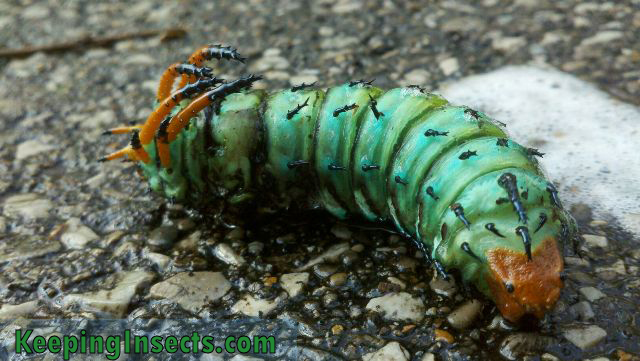 It’s the largest caterpillar species in North America, growing to about 6 inches. Right now they are leaving their trees to dig a hole in the ground where they will pupate. As a pupa they will survive the winter to emerge as a regal moth next spring. Hickory horned devils are greenish blue in color with large orange spikes near their head and smaller black spikes all over their body. When they are born they are completely black but already have their spikes. They are completely harmless to humans.

The Hickory horned devil is more beautiful on this -a bit dated- video:

Check out this cool video of mantises hatching out of their egg. Mantis eggs are enclosed in a hard foamy pouch called an ootheca. The nymphs wiggle out of the egg and out of the ootheca on a thin string. They immediately molt (shed their skin) for the first time. After that they look like tiny mantises. Before it molts for the first time it is called a pronymph, after the first molt they are called L1 nymphs. When the skin is off, the tiny mantis dries off and walks away!
This specific mantis species has nymphs that look a bit different than the “ordinary” mantis species like the European mantis (Mantis religiosa). But they way they hatch is very similar.

Keeping Insects is now also on Facebook. You can check out the pictures, add your own and chat with other insect enthusiasts! The link is:

Yes, it’s spring! At least you can feel it in the north part of the Northern Hemisphere. This means the insects are showing again. Caterpillars, butterflies, ants, and even praying mantises start to show again.

If you find a caterpillar of butterfly that you would like to know the species of, please e-mail me. I’ll see what I can do. Nice pictures will be featured on the home page of this website.

Always wondered if your own ant nest would be fun? I just added a new page to this website describing how to take care of an ant colony and how to build your own formicarium (ant nest).

You can also read all about ants, like their genetic system and how they work so well together.

Here is the link: Keeping Ants as Pets