Giant Asian Mantis, or more scientifically Hierodula membranacea, is one of the most common mantis pets. Its large size and the relative easiness of keeping this species contributes to its popularity. Sometimes this species is incorrectly referred to as Hierodula grandis.
It will not surprise you that the Giant Asian Mantis has its natural habitat in Asia. 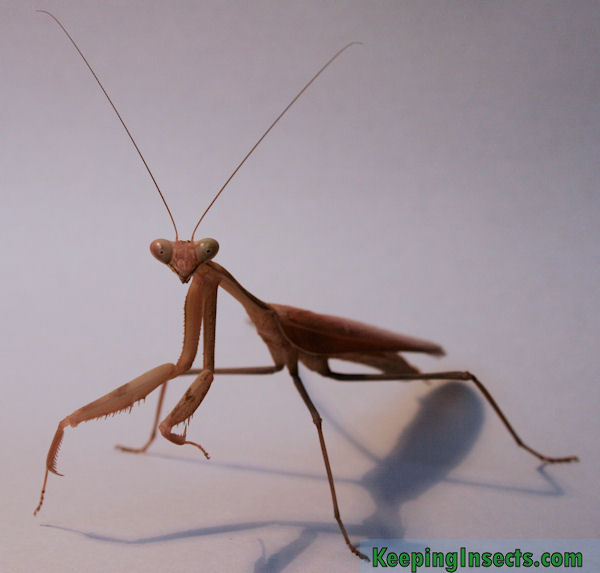 An adult Hierodula membranacea male. The females are much bigger and bulkier.

Appearance of the Giant Asian Mantis

The color of the Giant Asian Mantis is usually green, but there are also yellow, beige and brown varieties. The beige individuals can even seem a bit pinkish. The difference in color is mainly due to the environment in which the animal is kept. They can develop a different color in a matter of days, but it is not yet understood which conditions will trigger a change in color.
Hierodula membranacea is one of the largest mantis species that is successfully kept in captivity. Adult females are about 3,5 inches long (8 – 9 cm), the males are with their 3 inches (7 – 8 cm) a bit smaller. The males are also much thinner and lighter than the females. The wings of a male extend to just past the abdomen. The adult females are bigger and bulkier than the males, with wings that extend just to the abdomen.

Behavior of the Giant Asian Mantis

Hierodula membranacea is a fierce kind of praying mantis. This species will actively hunt its prey once it spots it. They are not the general sit-and-wait kind of predators. A large prey insect does not scare a Giant Asian Mantis, it will attack anything half its own body size or smaller. It won’t attack you and can be handled easily. It will not be stressed out from having its enclosure close to people or pets. 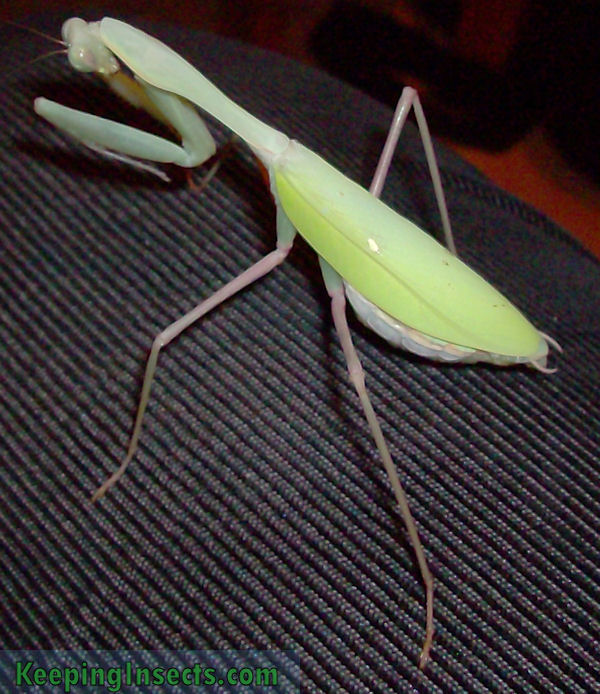 Food and feeding for the Giant Asian Mantis

Adult Giant Asian Mantises are no fuzzy eaters, they eat almost anything. When adult they can easily grab adult crickets, adult locusts and big cockroaches. Hierodula membranacea newborn L1 nymphs eat all species of fruit fly, and when older will eat small crickets, flies and young grasshoppers. They will hunt for their food and are not easily intimidated by their prey.

Environmental conditions and housing for this species

The ideal temperature for Hierodula membranacea is about 24 ° C, but room temperature will also do (20 ° C). At night it can be cooler than daytime but at least 17 ° C.
This species does not have high demands concerning humidity, but it is important to spray with water every other day to allow the mantis to drink. A target air humidity is about 40 to 65%. Too high air humidity is a leading cause of death for this species of mantis!
As with all species of praying mantis, this species needs a cage that is at least 3 times the length of the animal is height, and at least 2x the length of the animal in width. For an adult this means is at least 27 cm in height and 18 cm in width. A nice size for a terrarium would be 30 x 20 x 30 cm, so there is room for lots of fake plants and perches. 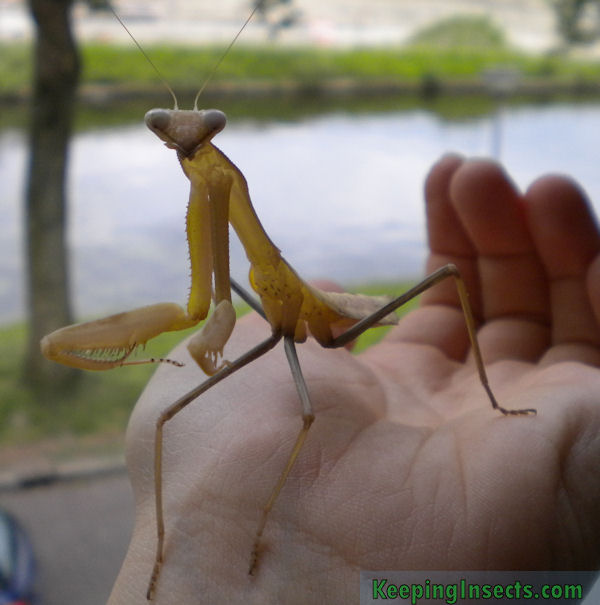 Because Hierodula membranacea such active predator, it is not recommened to house multiple individuals together. Sooner or later there will only be one left in the group enclosure. Young nymphs are not as cannibalistic as older nymphs and adults. Nymphs can be kept together in one enclosure until about L4 when fed excessively and housed spacious.

Breeding with the Giant Asian Mantis

The Giant Asian Mantis is a relatively easy mantis species to breed. Many people have succesfully bred this species in captivity. Here is how you can do it.

First, you need to make sure you have males and females of the Giant Asian Mantis. The females of this species are larger, heavier and wider than the males. From around L4 nymph instar you can spot the differences between the sexes by looking at the segments on the abdomen of the mantis. Females have six segments, while males have eight. This method of sex determination can be done in an early nymph stage, but can sometimes be difficult for the untrained eye. But the older the nymph becomes, the more easily the differences can be seen. Male nymphs are usually a bit smaller and will develop larger and thicker antennae than the females.

Approximately 2 to 4 weeks after both partners reach adulthood, a mating attempt could be made. Make sure that the female has eaten really well in the days before you put the male in her terrarium (You can read the general way to mate praying mantises here). The female can be very aggressive to the male. It is recommended to give the female a large prey just before you introduce the male, to keep her occupied. If you see the female behave agressively towards the male, it is better to remove the male and try another day. Giant Asian Mantis females are relatively often cannibalistic.

Mating can take several hours. The male has to be removed from the enclosure as soon as mating ends if you want him to live.

The female will produce around 5 to 8 ootheca. From each of these ootheca around 200 nymphs can hatch! The nymphs are small and brown – greenish and will start to eat fruitflies after a few hours to one day. Take care of the ootheca roughly the same as you take care of the species, ready more about this at the Mantis Ootheca Care page.